Iryna Matsyshyna: Russian tanks are staying in my vegetable garden

From the editor: Iryna Matsyshyna has a PhD in polital sciences and works as an Associate Professor at Vasyl Stus Donetsk National University. In her very personal and sincere essay, Iryna presents a perspective of a person whose childhood home appeared to be on the frontline in Eastern part of Ukraine. Her story is also about hope and despair, war experience of previous generations of Ukrainians, and ties with Russia that are cut off forever.

(Translated from Russian. Photo provided by the author)

I dreamt of my mother today. She was cuddling me, stroking my hair and whispering quietly, “Everything will be ok”. When I woke up, my pillow was wet from tears. I still could feel the touch of mamma’s hands in my hair. I am turning 50 this year, mother passed away two years ago. I have a grown-up dauther, a husband hundreds of kilomaters away, and a pregnant cat. My neighbour Sasha – a former military whose family left for Odesa – teaches me how to live during the war. He reassures me that the walls are thick, that they will not going to kill civilians, that if gas and electricity disappear, he has a gas cylinder at Slobodka. “You won’t hear the sound of your bullet”, says he. At night we are locking the gates of our yard with an extra padlock. We switch off the lights. Sacha turns on the music, the windows are shuttering from it. I cannot stop looking out of the window. It seems that the Russian tank is about to drive into the yard. And the rose I planted last year will never bloom.

If at the beginning of this year I had been told that I was paranoid, I would have felt offended. I have always considered myself to be emotive. In January I was skiing in the Carpathians, meeting my friends in Kharkov, planning to paint the door in my country home yellow. Today I receive brief messages from my friends from the Kharkiv subway. In the village where a yellow door was supposed to be, people are hiding in the basements. Russian tanks are staying in my vegetable garden. Their soldiers break the windows, smash the furniture, take away food and valuables. The defiants are taken away at gunpoint. Later some of them come back, some are found dead in the village centre, some disappear. I could never reach my neighbours who used to come to their dacha in summer. They stayed in Izium – a city practically destroyed by the “liberators from Nazism”. A city that spoke Russian and have always respected Russia and Putin.

I learned so much during last month: when the legs are shaking, one should not run but rather sit down; when there is shooting at the street, one should stay away from the window; when one wants to wail from gief, one should wait until nobody can hear. And I was lucky to avoid experience of being in Kharkiv, Kyiv and Mariupol.

When I was a kid, my granny used to dry bread, buy matches, cook homemade canned meat. “Just in case”, she used to tell us, her grandkids, who could never understand her. We have come full circle now. Today we have a decent supply of matches, water, dry bread, and my sister is making canned meat. However, it seems that I have totally missed that “just in case” moment. I was not prepared for the war. I understood that the war was on its way, but I was not prepared for it. I still don’t have ready answers for the words: “We don’t have home any more”, “Today we have buried Vova”, “The number you are trying to reach does not exist”. I have failed to build a psychological barrier to protect myself against the Lavrov and Putin cynical lies that they did not invade Ukraine. I don’t know how to react on executions of civilians conducted by Russian occupiers.

… I had a plan for “tomorrow”: to take a niece to school, to go for a morning run, to cook borshch, make my hair cut and write the book I planned to finish by May. Before going to bed, I looked at the sea out of the window on the 15th floor. The noice of the waves was heard from the dark blur behind the window. At five in the morning a call from a friend woke me up. “Are you still asleep? The war has broken out. They are shelling Skadovsk! Arthur fought in Transnistria. He knows. These are real explosions”. I came to the window. The strange lights were hanging over the sea with muffled sounds coming from far away. If not for that call, I would have assumed that it was a thunder. It was not impossible in the end of February.

I woke up my husband and the niece. We got dressed quickly, took a backpack with documents that we prepared in advance, jumped into an elevator. It never moved so slowly as that morning. My thoughts were chaotic. For some reason, I regretted so much about failed morning run. On the other hand, I was surprised by my consistency: to buy food for three days ahead, to pick up our daughter and her cat, to ring my sister who was on call in the hospital, to put all stuff into to the basement of our house that we had prepared in advance. I was ready for the war. We had discussed the situation with the friends, speculated about possible scenarious, tried to locate possible firing points. But I was not ready for explosions, bombs and missiles. The airport in one kilometer from our house was destroyed instantly, in 800 meters – empty industrial warehouses were ablaze, in 100 meters the air raid siren was wholing in unison with wholing sky. Some of the familiar faces are preserved only on old photos.

During the first days I was writing emails to my Russian colleagues, posting comments in social media groups, published artlices in the Russian oppositional newspapers. It seemed as some kind of misunderstanding, that if they protest on Russian streets and support us, Russian bombs would stop falling down on our cities. Then, it became clear that lines in front of the brand stores are exceeding in numbers the rally participants in Moscow. My Russian colleauges listened to me and mumbled something in reply appologising. However, for the majority of the Russians, I – a Russian speaker – was a Nazi just because Ukraine is my motherland. The more I pleaded, the more victims on our territory they wanted.

I know that the Americans needed two years to proceed from the general delight from the Vietnam war to its public condemnation. The Germans needed five years. Perhaps, Russians will also need some years to move from silence and euphoria to awareness of their involvement in this terrible crime. However, when every day may become the last, it does not matter. Criminal moral is acting here and now. And the slaves of their tyrant are responsible for it. I think a lot about the sence of shared responsibility that is absent in today’s Russia. Those few who feel it leave the country or get arrested. The majority that encourages their military to kill us feed on false statements from the politicians, quotes from the Bible, actors and journalists who are serving at “the court”. They believe in being chosen by God, their national haughtiness, contempt and haterage to the independent development of the neighbouring countries. Which are smaller by territory but stronger in their spirituality.

All these days when I was thinking about my life that can be ended any time by the Russian thug with AK, I remembered my school friend Lenka. We used to sit next to each other right in front of the teacher. We even managed to cheat on the physics classes. We used to sew the school party constumes for each other, share our emotions from the first kisses. She could speak the truth openly. She could admit her mistakes. “You have a justice complex”, used to say I and she did not objected to this diagnosis. Even in years we continued to meet each other from time to time and tell each other that we were proud of our friendship, that it was forever. Then Lenka left for Russia. She was somewhere in the north, later moved to Moscow. Our connection broke. When I think that there is shared responsibility behind Russian bombs, misseles, tanks and lies, I remember my Lenka. She has never found courage to message me three simple words “How are you?” 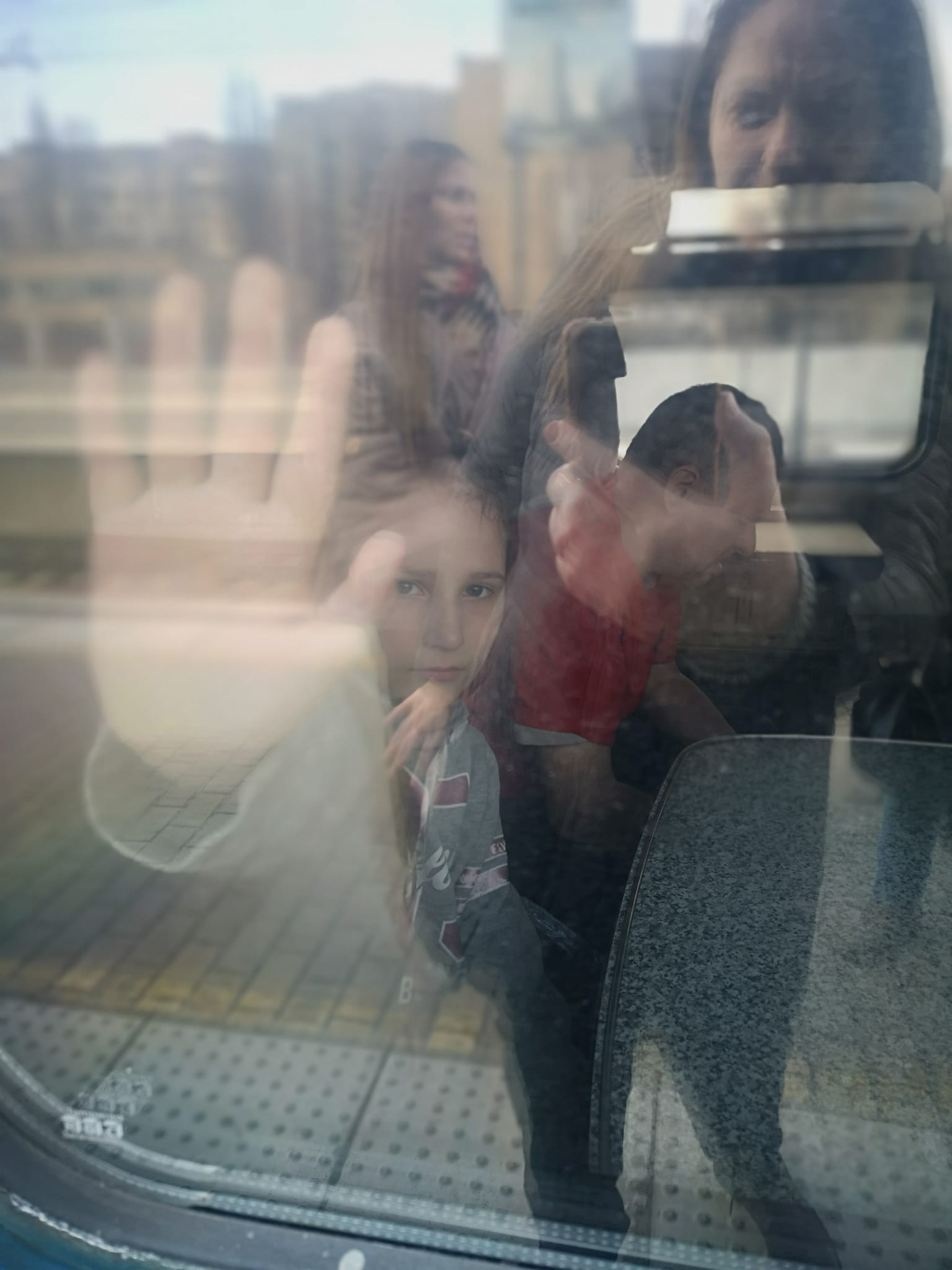