Arctic in focus during IRES visit in Syvtyvkar 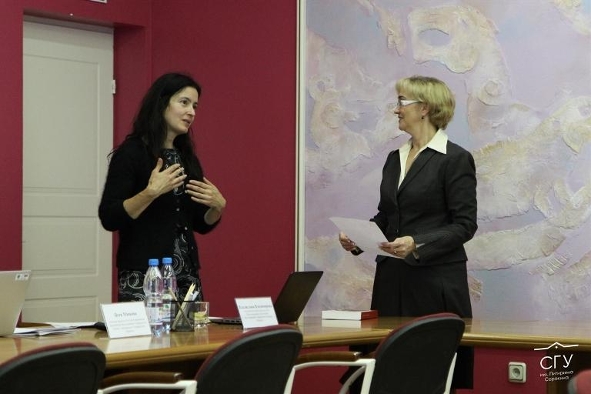 IRES is a research institute with a multidisciplinary profile. It hosts a large number of projects spanning across over a dozen of academic disciplines  and multitude of countries and strategically important geographical areas, among which is the Arctic. The Network on Integrated Arctic Studies (IAS), coordinated  by our colleague Olga Bogolepova, is designed to provide a forum for exchange of knowledge and cooperation  among Nordic and Russian researchers working in the Russian Arctic. Within the framework of the project Vladislava Vladimirova (IRES) together with colleagues from the University of Tromsø spent four days at Pitirim Sorokin Syktyvkar State University (Russia). The visit lasted between 28 September and 1 October and included among other things a formal meeting with University Leadership represented by the Rector Olga Aleksandrovna Sotnikova, and discussions with scholars from the Institute of Humanities, the Institure of Culture and Arts, the Institute of History and Law, and  the Institute of Natural Sciences. In addition meetings were organized with representatives of the Komi Centre, and regional Unit of the Russian Academy of Sciences, and more specifically within the fields of Social Anthropology, Ethnology, and Geology. Our colleagues saw also the research labs, the Museum of Komi History at the University, the Museum of Zoology, and the Museum of Geology named after A.A. Cherhov. During the visit Vladislava Vladimirova introduced The Network on Integrated Arctic Studies project for Syvtyvkar colleagues. The main focus of the discussed joint project application work and cooperation more generally  is the study of the Russian Arctic from cross disciplinary perspective. One specific area of such study is  the interface of human practices and nature in Arctic environments. Results expected from the project will allow developing the scientific basis for further collaborative research projects and educational courses. Project’s goal  is to promote interdisciplinary, cross-cultural and thus comparative research in the Arctic.

-          We are planning to expand this research network in the Arctic region, in order to discuss opportunities for joint   project work  with  focus on the Arctic both in the realm of education and of research, - said Vladislava Vladimirova during the visit in Syktyvkar.

For detailed information about the project please visit the IAS project page.

Original news about the visit can be found on the Pitirim Sorokin Syktyvkar State University (in Russian).

News from the Institute